Welcome to a New Beginning

At least its new to me.

I’ve been dreaming of a new adventure for quite a while now, some might say a little obsessively, and the time is fast approaching that it will take a real form and carry me towards some very nice horizons.

The IntraCoastal Waterway is a network of canals connecting natural water courses along the sea shore of the Southern and Eastern USA. Its primary purpose is to allow the movement of huge load carrying barges to and from various sea ports and industrial complexes without venturing into the exposed waters of the Gulf of Mexico or the Atlantic Ocean.

In 1826, the first survey was authorized for a canal system that would link the Gulf and the Atlantic. Nowadays the overall IntraCoastal Waterway is 3000 miles long (4800 km) consisting of three main sections.

The Atlantic Intracoastal Waterway is a part of the American Great Loop; a water navigable journey that encircles the Eastern portion of the USA.

At the moment my interest is focused on the Gulf of Mexico portion, the GICW. 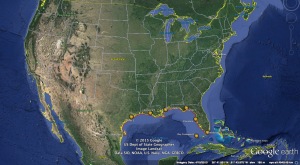 Why the Gulf of Mexico section?

Why not I say.

There are areas that don’t seem to be highly populated (by American standards) and there seems to be very little documented about recreational traveling through or along this coastal area of the USA.

Huge areas of coastal flat lands that stretch to the horizon from I’m told, vast areas of everglades that hardly see any people and these are things I would like to witness here in the States.

My homeland, Australia, is physically about the same size as the US lower 48. The population here in the US is somewhere around 320 million people, in Australia we have just over 23 million; 300 million less for the same size land mass!

So, if I can find some places that are remote, and go out and get lonely for a while, I think that will be absolutely lovely.

I’ll be filming and writing as I travel along and who knows, maybe I’ll share something that you never knew about this great land.